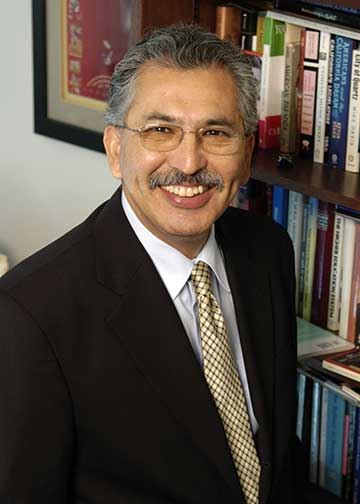 Manuel N. Gómez served as Vice Chancellor of Student Affairs at UCI from 1995 to 2010. He began his career as the director of the UC Irvine Educational Opportunity Program, served as a program officer for the Fund for the Improvement of Postsecondary Education in Washington D.C., and interim Vice President for Educational Partnerships in the University of California Office of the President. He was a member of the Children First, Paul Merage Foundation, and currently serves on the Board of Trustees for the National Hispanic Cultural Center in Albuquerque, New Mexico, for the UC Berkeley Institute for the Study of Higher Education, and the Board of Governors for the Orange County Community Foundation. Manuel received his Ph.D. in Higher Education: Policy and Organization from USC. He has a B.A. in History from CSU, Hayward, and a Master's in Social Ecology from UC Irvine. He is co-author of To Advance Learning: A Handbook on Developing K-12 Postsecondary Partnerships (1990), along with numerous articles on K-16 education. He founded the XIV Dalai Lama Scholars program. He has supported El Sol, Academy of Arts and Sciences since its inception. In 2011, Manuel received the UCI Medal. Manuel is also a published poet.