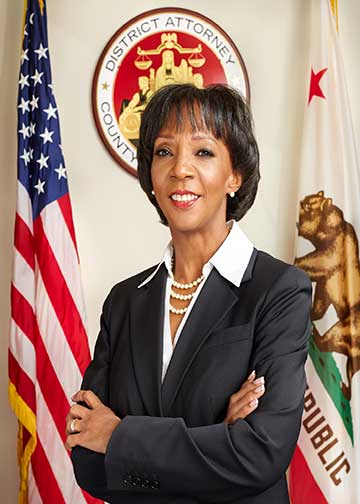 Jackie Lacey has spent most of her professional life as a prosecutor, manager, and executive in the Los Angeles County District Attorney’s Office. On December 3, 2012, she was sworn in as the 42nd Los Angeles District Attorney. She is the first woman and first African-American to serve as Los Angeles County District Attorney since the office was created in 1850. A Los Angeles native and graduate of the University of Southern California Law School, Ms. Lacey joined the largest local prosecutorial office in the nation in 1986 as a deputy district attorney. Ms. Lacey won national attention for her successful prosecution of the county's first race-based hate crime murder. Ms. Lacey has overseen the development of several groundbreaking crime-fighting initiatives within the office. They include the nation’s first Animal Cruelty Prosecution Program, the Graffiti Prosecution Program, and the Project Safe Neighborhoods Gun Prosecution Program. She was key in the creation of alternative sentencing courts to deal with specific nonviolent offenders. As a result of Jackie’s career achievements in trial, and her leadership efforts, the Los Angeles and San Francisco Daily Journal named her one of the Top Women Litigators of 2009. She was elected to a four-year term of office. Ms. Lacey is a graduate of UCI and Dorsey High School in Los Angeles. She and her husband, David, have two adult children.