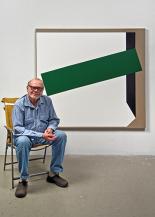 Tony Delap became an art professor in San Francisco before landing a job at UC Davis. In the mid-1960s, he came to Orange County to teach art at UC Irvine. During this time, DeLap was employed to work on trade shows exhibitions and practiced freelance graphic design while applying his talents at painting and sculptures. In fact, it was during his time as a designer, making displays for trade shows that could easily be constructed and taken apart, that he came up with the idea of making portable sculpture. Before he built his current studio, Tony DeLap rented a large workspace in Costa Mesa, near crafts and construction shops. He learned from his neighbors, and evolved as a craftsman as well as an artist. In 2011, Tony DeLap was involved with the SoCal art movement, Pacific Standard Time, with the exhibition, "Best Kept Secret: UCI and the Development of Contemporary Art in Southern California, 1964-1971," at Laguna Art Museum. This show exhibited works by art instructors and students at the University of California at Irvine in the late sixties and early seventies, who created conceptualism, performance, video, feminist and installation art. 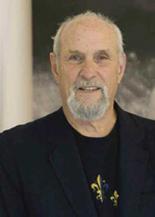 Hal Glicksman curated a number of key exhibitions in Southern California during the 1960s and 1970s. He started his career as a preparator at the Pasadena Art Museum, where he helped formalize professional guidelines for preparators. During his time there, Glicksman worked on the 1963 Marcel Duchamp retrospective. He also designed and installed the United States' presentation for the eighth Bienal Internacional de São Paulo, Brazil in 1965. In 1970 Glicksman accepted a position as Associate Director of the Corcoran Gallery of Art in Washington, D.C. and later returned to California in 1972 as Director of the Art Gallery at UCI. Among the significant group exhibitions he curated at UCI, Assemblage in California and Los Four demonstrate Glicksman's long-term interest in both Chicano art and assemblage art in California. In 1975 Glicksman organized the large-scale exhibition Collage and Assemblage at the Los Angeles Institute of Contemporary Art and appointed Art Gallery Director at Otis Art Institute, where he curated exhibitions focusing on contemporary artists. In 1981 he founded his own gallery, Percept, a short-lived venue for light and space art. Glicksman also played an important role in the 1985 founding of the Santa Monica Museum of Art, where he served as the museum's first director and helped establish the museum's collecting policy and development agenda. 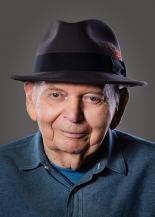 Ceramics artist John Mason taught at UCI from 1967-76 and then again in 1987.  He was the Chair of Studio Art from 1974-1976. Recent attention to his work occurred in Pacific Standard Time exhibits throughout Southern California and in the 2013 exhibit of his landmark piece 21-foot-long Blue Wall (1959) at the Laguna Art Museum. In the fall of 1968, the UCI Studio Art faculty consisted of Robert Irwin, Craig Kaufman, Tony de Lap, John Mason and Philip McAleer.