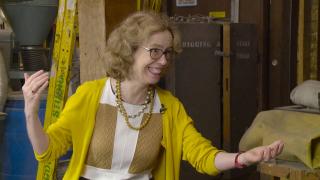 Julia Lupton and Eli Simon - Lupton's Goals For The Future 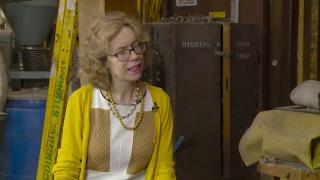 Lupton shares her goals for the future of the English Department, the New Swan Theater, and Illuminations: The Chancellor's Arts and Culture Initiative.

Simon talks about his clowning technique and how he was able to take it abroad.

Julia Lupton and Eli Simon - Lupton's Goals For The Future

Lupton shares her goals for the future of the English Department, the New Swan Theater, and Illuminations: The Chancellor's Arts and Culture Initiative. 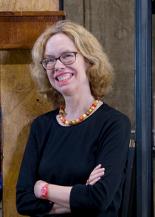 Julia Reinhard Lupton has taught at UCI since 1989. She is a professor of English with affiliations in Comparative Literature and Education. She has contributed to the founding of a number of initiatives on campus, including Humanities Out There, the Humanities Commons, the UCI Shakespeare Center, and Illuminations: The Chancellor’s Arts and Culture Initiative. While at UCI, she has received many awards for her teaching and service. She is the author of four books on Shakespeare. She is the winner of ACLS and Guggenheim Fellowships, and is a Trustee of the Shakespeare Association of America. Lupton has a Ph.D in Renaissance Studies from Yale University. 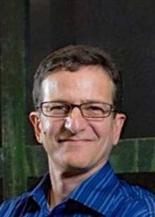 Eli Simon is the Artistic Director of New Swan Shakespeare Festival, a professional summer theater that performs on the campus of UCI with the support of the Drama Department, the Claire Trevor School of the Arts, and UCI. A Chancellor’s Professor of Acting in the Department of Drama, this marks Eli’s 28th year at UCI. Eli is the author of three books. He specializes in Shakespearean productions, clowning, and original masked performances. Eli has directed over one hundred productions at Shakespearean festivals, regional theaters, and international theaters across the states and overseas. Simon was the co-artistic director of Pan Pacific Players – dedicated to the creation of original multi-cultural and multi-lingual plays. Their seminal work, Birds in DMZ, combined American, Korean, and European performers, traditional Korean music, devised masks and costumes, Bong-San dancing, commedia, and opera. At New Swan Shakespeare Festival, Eli oversees artistic decisions such as play selection and casting, and guides fundraising, music events, and community outreach. Eli and Julia Lupton are the co-founders and co-directors of the UCI Shakespeare Center. For New Swan, Eli has directed The Merchant of Venice, King Lear, Twelfth Night, Macbeth, and As You Like It. Eli holds a B.A. in Drama from UC Davis, and an MFA in Acting from Brandeis.